Skip to content
‘So I Say Thank You For The Books…’ is a regular feature where we invite Authors and book bloggers to share with us who or what inspired their love of books.

Find out more and how to get involved HERE 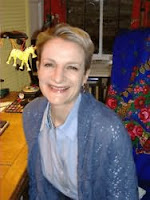 I was brought up in a creaky, leaky old house on the edge of a wild moor in northern England, about 11 miles as the crow flies to the parsonage in which Emily, Charlotte and Anne Bronte lived.  Inside our house, through which the wind whistled and groaned much as Emily Bronte describes in Wuthering Heights, were hundreds of books, all written by authors already dead, which is why, for years, I thought you couldn’t be an author until you were dead yourself.


The seven of us (six girls, one boy, I’m number 3) were looked after by a succession of nannies, some nice and some perfectly horrible.  But though there were strict rules about Sitting Up Straight and Saying Please and Thankyou, we could read anything we liked, from anywhere, so long as we put it back.  Anything, that is, except Enid Blyton (whose books we devoured surreptitiously, under the bedclothes, when Nanny had turned out the light).

I read all the time, so it’s as hard to choose favourite books as it is to choose a favourite pet.  Yet I suppose because I longed to be a brave rider, I especially loved Mary O’Hara’s My Friend Flicka series.  I sat with Ken, in the brook, willing Flicka to live;  I clung to Thunderhead’s mane as he battled with Banner.  I was dead jealous of Carey. Those books are on my shelf still.  Then, how could I not choose Ursula Moray Williams’ The Little Wooden Horse, when the little wooden horse was just as real to me as my own, naughty piebald pony?  And finally, though I’m long grown up, every year I still read The Black Riders by Violet Needham, which is nothing to do with horses at all;  it’s about a boy who gets caught up in a revolution. Stormy Petrel is his code name, and the password, my dear fellow-readers, is ‘Fortitude’.

Belle’s Song by K M Grant When Belle meets Luke, son of an alchemist and Scribe to the famous poet Chaucer, she is determined to travel with him to Canterbury on a pilgrimage. She hopes for a miracle: that her father will walk again. She also hopes to atone for her own part in his accident. It is a time of unrest across the country and the young King Richard II is just hanging on to his throne. A malign character on the pilgrimage suspects Chaucer of treason and slowly winds Belle into a political intrigue. At the same time, the impulsive Belle is drawn towards both Luke and to Walter, the wealthy son of a Knight. But Walter himself is in love with Luke…As the uprising against the King starts to draw pace and the web of intrigue around Belle and Chaucer tightens, Belle and her friends must risk everything to save their country and themselves… (Goodreads.com)

There was an error retrieving images from Instagram. An attempt will be remade in a few minutes.